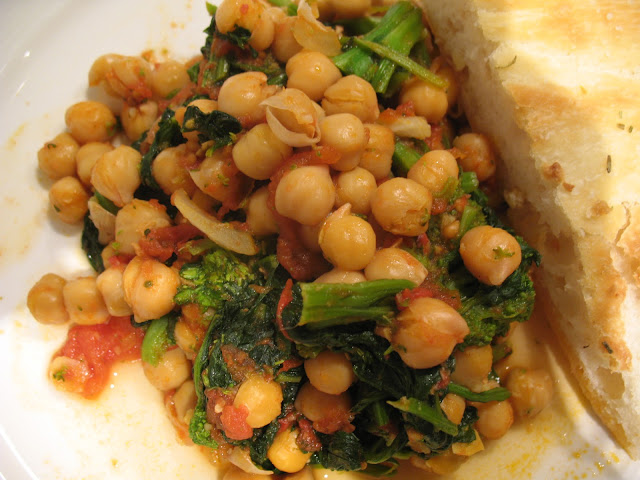 Looking for a healthy and super easy week night meal?

Simply start by making a quick marinara sauce by sauteing in some hot olive oil; one half of a small onion, a finely chopped garlic, and adding half of a finely chopped carrot and celery stick. This will take under five minutes. Add a large can of tomatoes and allow to simmer while preparing the rapini. Season to taste with salt and pepper.

Step two: Cook the rapini as shown below (earlier post on preparing rapini/rape)

Step three: Rinse and drain one can of chick peas. Toss into the rapini which has been sauteed in olive oil and garlic. Cook for a minute or two to allow the flavours to infuse.

Step four: Add  the marinara sauce to the rapini and chick peas mixture. Cook for a minute or two, grate some fresh parmesan cheese on-top, toss and serve hot. Delicious served with homemade foccaccia.(check out the no knead easy bread recipe  which makes great focaccia ) 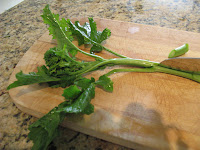 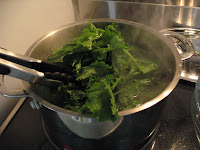 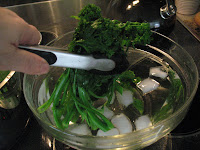 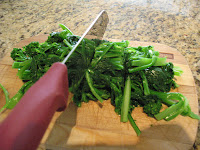 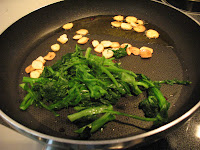 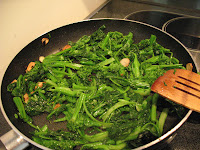 Begin by washing the rapini and cutting about an 1 inch off the stem. To allow for more even cooking with a knife, split about 1-2 inches down the center of the lower part of the rapini stem. This allows for more even cooking. Wash the rapini under cold water and drain. Fill a large pot with water and bring to a boil. I add salt to the boiling water as you would do, when cooking pasta. Drop the rapini in the salted boiling water and cook for about 1 minutes until "a la dente".
Strain the rapini and place it immediately in a large bowl filled with ice water. Strain and remove the excess water by wringing the rapini with your hands or paper towel. Cut into 3 pieces and set aside. In a frying pan heat the oil and add the garlic slices and red chili flakes. Saute the garlic until a golden colour. Add the rapini as shown in the photo, away from the sizzling oil as it tends to splatter, and continue cooking on medium heat to infuse the flavours, for about 1 to 2 minutes. Do not over cook. Season with salt. Serve as a side dish or toss into a hot pasta and tomato sauce dish. So from my family to yours, buon appetito!
Posted by Anna C