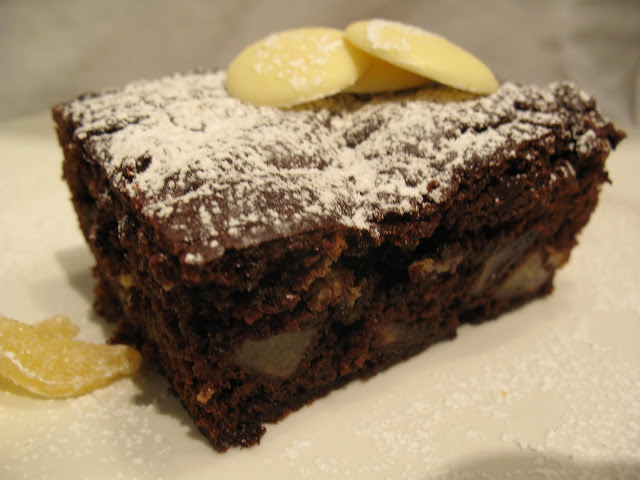 To paraphrase Clint Eastwood (from the 1971 movie "Dirty Harry"),......'You've got to ask yourself one question: do I feel lucky?' That's exactly what  popped into my mind when I decided to deconstruct a molasses spice cake recipe after realizing I didn't have marmalade, one of the main ingredients called for. I did however have fresh pears, crystallized ginger, white chocolate and why not throw in some Dutch dark chocolate cocoa into the mix. Missing from the original recipe was the sugar, which I assumed had been replaced by the sweetness of the marmalade. I really had no choice in this but to take a stab at the amount of sugar to be added to the recipe. Knowing full well that it's foolish to toy with the main ingredients when baking; I quelled any possible trepidation by thinking of the grand dame of cuisine. Even Julia Child had some less than perfect results on her earlier PBS episode.... so why not go for broke?
Luckily the gamble payed off. The cake turned out moist and almost fudge-like but without being too sweet. The crystallized ginger gave every bite a little zing, complimenting the pears as did the chocolate, which of course marries well with cinnamon. Given all the rich ingredients, a simple dusting of icing sugar was all that was needed to enjoy it. So if you dare give it a try, I would love to hear your comments on how it turns out.

In a mixing bowl sift in the flour, cinnamon, ginger, baking powder, baking soda and cocoa powder. Whisk the ingredients to blend. Toss in the the diced pears, crystallized ginger and white chocolate pieces. Stir with a wooden spoon to coat. In a separate bowl, beat the egg, whisk in the melted butter and 6 tablespoons of water. Pour into the dry ingredients and mix with a wooden spoon until blended. Do not over mix. Pour into a prepared 8" inch pan and bake in a pre-heated 350º F oven for 30-35 minutes. The cake is done when a wooden skewer inserted in the center comes out clean. 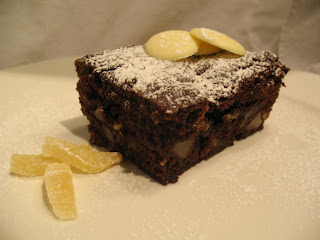