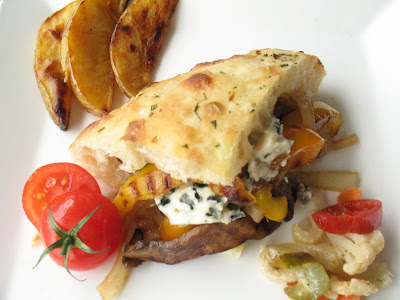 Oh my Gosh!  It is actually possible to get excited about a meatless burger. It's time to chalk up a point for the vegetarians out there.  I drizzled some extra virgin olive oil and balsamic vinegar on the portobello mushrooms before grilling them. Instead of using store bought hamburger buns which were ready to be toasted, my homemade focaccia called out to me and thought, why not go for it.  Again it's the little touches that can bring a dish to the next level.
The focaccia with the hint of garlic and rosemary worked well with the meaty portobello mushrooms, the grilled bell pepper,caramelized onions and the piéce de résistance, the blue Stilton cheese.
Posted by Anna C