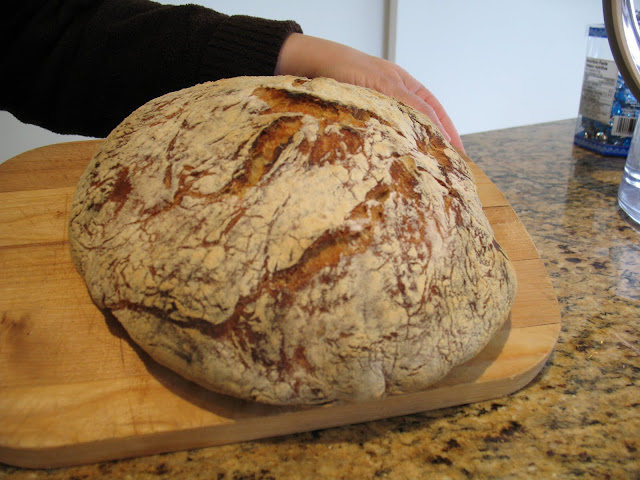 This recipe is foolproof for those that have an inherent fear of tackling bread with the infamous ingredient, yeast. I actually discovered the recipe, adapted from Jim Lahey of Sullivan Street Bakery, in the New York Times. The video is accessible on the net. The only drawback is acquiring a cast iron dutch oven, genre "Le Creuset". Well worth the investment as it pays for itself once you are on a roll with bread making. Doesn't get much simpler than this recipe.


In a large mixing bowl combine the flour, yeast and salt. Stir in the water. The dough will be wet and sticky. Place a plastic wrap to prevent it from drying. Cover with a dish towel and let rest in a warm place for 12 to 24 hours.
Scrape the dough onto a floured surface


Sprinkle some flour over the dough, as not to stick on your fingers, and pat it down. Fold the edges to the center and form a ball. 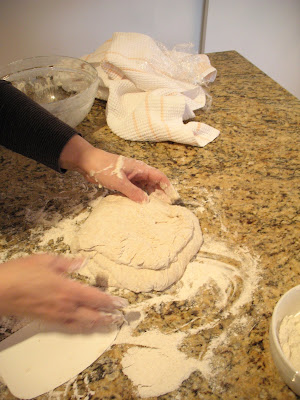 Flour a dry dish towel and place the dough on it, seam side down. Sprinkle more flour on the dough and wrap in the towel. Let rest 2 hours in a warm place. The dough should double in size.
Place a cast iron dutch oven (with cover on) in the oven, and set the heat to 500 degrees F.
When ready, remove the pot and place the dough into it, seam side up. Cover with the lid and bake for 30 minutes. Remove the lid and continue baking at 475 degrees F. for 12 to 15 minutes. Cool on a rack.
Posted by Anna C