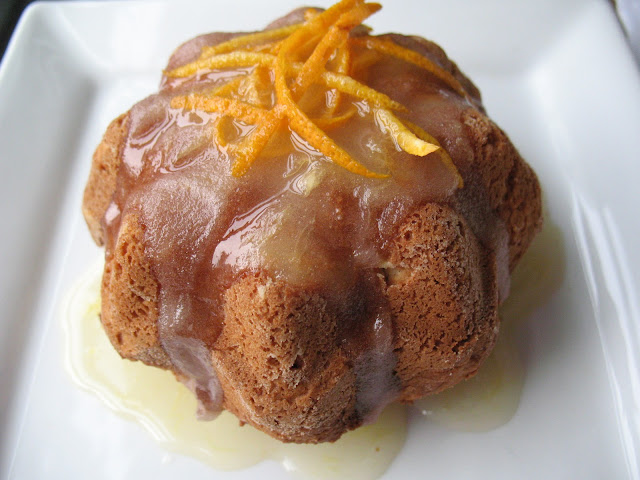 Looking for a good nut quick bread recipe? Well I would love to share mine with you. The orange nut quick bread that I've been baking for years comes from my old tattered Five Roses Flour recipe book, one of the first ones I used when I started baking. For my friends in other countries, Five Roses is simply a brand of flour sold in Canada. In fact the neon Five Roses Flour's sign, a Montreal landmark which was erected in 1948, still greets visitors as they enter our
fair city.
. Note: Top off the orange nut bread loaf with an easy to make orange glaze (recipe follows).
You might also like to try molds other than the traditional loaf pan.

According to Wikipedia, "Quick Bread"possibly originated from the United States of America at the end of the eighteenth century. Before the creation of Quick bread, baked goods were leavened with either yeast or by mixing dough with eggs."  In order to respond to increased demands for baked goods during the American Civil War, baking soda was used as a leavening agent to provide more rapid results and therefore the creation of 'quick bread'.

Orange Glaze:
juice of half an orange
1/4 cup granulated sugar
In a small bowl mix the the orange juice and sugar

Pre-heat the oven to 350º F. Grease and flour an 8 ½ “x 4½" x 2½ " loaf pan
In a mixing bowl, blend the flour, baking powder and salt.
In a separate bowl; cream the butter and gradually beat in the sugar.
Beat the eggs into the butter/sugar mixture. Stir in the orange rind.
Add the dry ingredients alternately with the milk to the egg butter mixture. Mix well after each addition.
Fold in the nuts.
Pour into the prepared loaf pan and bake for 50-60 minutes. Brush on the orange glaze. Return the loaf to the oven for and additional minute.
Allow to cool for about ten minutes before transferring to a wire rack for further cooling.