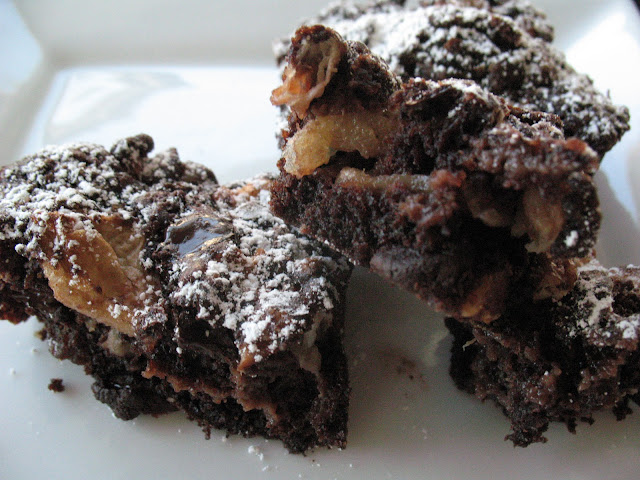 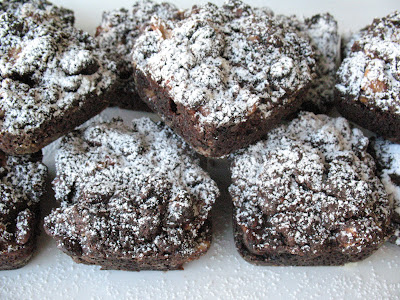 Instead of using a standard 10 inch bundt pan, I decided to christen my new "square muffin tins" to bake my version of an old apple coffeecake recipe. Yup, I once again gave into temptation and bought more bakeware. What can I say, the "square muffin tin pans" were calling out to me with visions of mini cakes just waiting to be baked. Thank goodness I had just redone my little pantry and managed to make room for my latest acquisitions.
Given my need for a chocolate fix, I altered the original apple coffee cake recipe quite a bit. I added deep dark Dutch cocoa, pecans and raisins to compliment the apples. Deciding to diminish the amount of oil  in the recipe, I added an extra egg.  I suggest you fill the mini tins to the top as the batter doesn't rise much while baking. The batter is rather thick, and appears crumbly but bakes up perfectly rich and moist with chunks of apples with every bite. Also delicious slightly re-heated in the microwave with a scoop of vanilla ice cream. 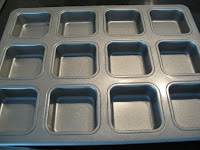 
In a large bowl sift the dry ingredients to blend. Toss in the raisins, pecans and chocolate chips.
In a separate bowl beat the 3 eggs and add the sugar, vanilla and oil. Beat to combine.
Blend in the egg mixture to the dry ingredients. Mix in the apple pieces. The batter will be thick and  crumbly. Spoon into 24 prepared square muffin tins or into a 10" prepared tube pan. Fill to the top of the muffin tins as the batter will not rise much.  Bake in a pre-heated 350º F oven. Mini coffee cakes will take 30-35 minutes and 50-60 minutes for the larger cake.
Posted by Anna C