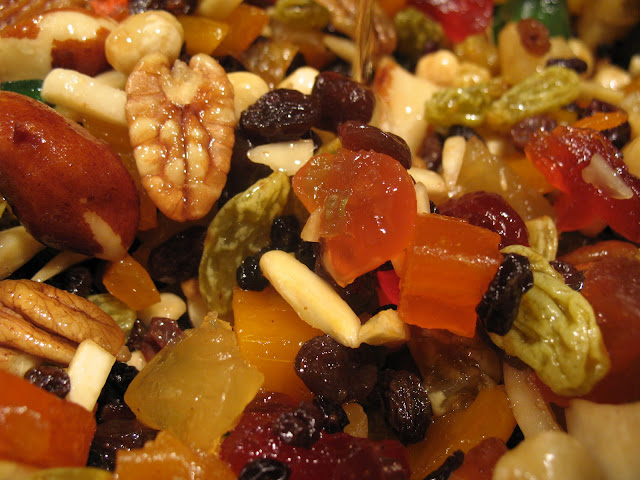 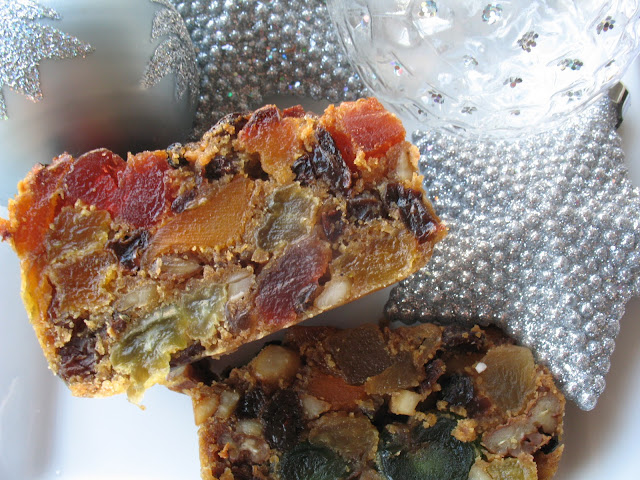 I've taken it upon myself to defend the much maligned "fruitcake", which has become the butt of many holiday jokes. It has been known to conjure up visions of "grannies" and  "brick doorstops". It has probably even made it on some list for the most dreaded gift to receive. In my case, I associate the fruitcake with the "magic of Christmas" past and "visions of sugarplums". I delight in each nutty and fruity morsel as does my friend Nicole, who is also a connoisseur of fine fruitcakes. I still recall the enjoyment long after the holidays had passed, savouring each bite of  her mother-in-law's treasured fruitcake during our coffebreaks at the office,.  I never did manage to get my hands on her recipe but was determined to one day, come up with one that met my standards.......plenty of brandy, plus tons of colourful fruit and nuts.

Last year, I fell upon a "Robin Hood flour "recipe, and adapted it to my liking by adding molasses for its taste, plus additional nuts and fruit. The results were so good that I ended up rationing what was given away, in order to have some for the months to follow. Now as November rolls around, I already envision the ingredients I want to incorporate and the challenge of finding them at my favourite stores.


Let your imagination and taste buds guide you in choosing the fruits and nuts to personalize the recipe. Brazilian nuts hold special childhood memories of my parents  festive Christmas table. I've always loved the rich exotic flavour and texture of  the nuts, and I make sure to have a healthy helping in my recipe, along with the abundant almonds, pecans and hazelnuts already in the mix.  Candied mango is another favourite which I couldn't resist adding for flavour and colour.  I guess  the final recipe is a mishmash of tropical (mango, papaya and pineapple) ingredients and the the more traditional ones (raisins, currants and candied cherries). The other vital ingredient is the brandy, and I admit having a heavy hand when it comes to adding it to the recipe. I can never resist sneaking a few pieces of the fruit and nuts from the bowl, as it sits on my kitchen counter soaking all the wonderful flavour of that golden brandy. In fact, I believe the glistening fruit and nuts mixture is probably the reason for  my  procrastination, allowing the fruit and nuts to macerate longer than the twenty four hours suggested in most recipes.

The following ingredients posted are from the original Robin Hood recipe, and below is my adapted version with more than the suggested amount of fruit and nut mixture. Who needs all that batter anyway when you have all that amazing soused fruit and nut mixture as the star of the show. The addition of  extra fruit and nuts made for a monstrous amount of batter; enough for two 8" loaves, two smaller loaves, and one long bread loaf pan.

I can't wait to see your take on the fruitcake debate and hopefully have a few chuckles along the way.

Preheat the oven to 275º F and prepare three 9x9 loaf pans (greased and lined with parchment paper)
In a large mixing bowl toss the fruit and nuts in 1 cup of flour to coat. In another bowl combine the 1 1/2 cups of flour, baking powder,salt, and spices. Set aside. Cream the butter, honey and vanilla on medium speed of an electric mixer. Add the eggs one at a time, beating after each addition. Add the dry ingredients, on low seed until blended. Stir in the fruit and nut mixture. Spread the batter evenly in the prepared pans. Place a pan of hot water on the bottom rack of the oven and place the cakes on the middle rack. Bake for 2-21/2 hours or until a wooden toothpick inserted in the center comes out clean. Wrap well and store in a cool dry place.

In a large pour the brandy into the fruit and nut mixture. Toss to coat with the brandy. Allow to macerate for 24 hours. 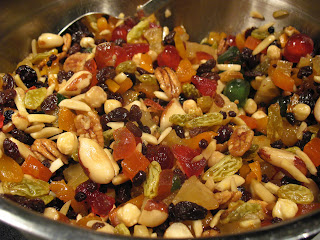 Batter:
Substitute half of the honey in the original recipe with dark molasses, giving you 3/4 cups honey and 3/4 cups molasses.  Coat the soused fruit with a cup of flour and set aside.  Follow the same directions for the batter as the recipe above. 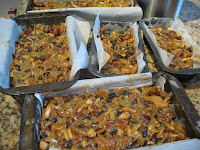 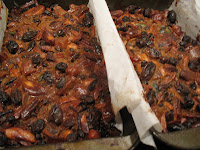